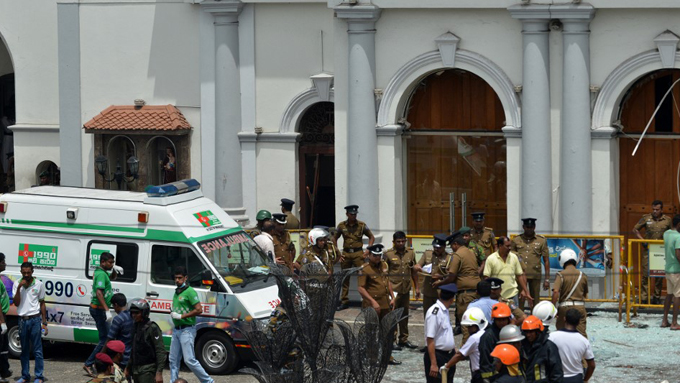 "From Monday onwards, there have been so many inquiries from firms, so we have given them the terrorism cover," National Insurance Trust Fund Chairman Manjula de Silva said.

Even vehicle owners were taking up the terrorism cover, he said.
The state-owned NITF operates the Strike, Riot, Civil Commotion & Terrorism insurance fund.
"Going forward, there will be a big demand," de Silva said.
"All the insurance companies have been reporting to us that there has been higher demand for terrorism covers all of a sudden."
Security forces are still on the hunt for hidden bombs.
Controlled explosions of suspicious vehicles and parcels have become frequent over the past three days.
Over 60 suspects have so far been arrested, after a spate of suicide bombings by a radical Islamist group on three churches and three luxury hotels left over 350 dead and 500 wounded.
De Silva said an assessment on the damage on the hotels had not been made yet, but the NITF will give an advance claim of 25 million rupees each to The Kingsbury and the Cinnamon Grand hotels  (international chain Shangri-La is covered through a global policy).
He said a clearer picture on the total damages from the attacks, and the resulting insurance claims could be seen on Thursday, when the insurance industry meets for its regular monthly meeting.
Authorities have said that more suspects are on the loose, and may be armed with a truck load of explosives.
Complacent
Most firms had discontinued their terrorism insurance cover after the end of the 30-year civil war in May 2009, even though globally, terrorism picked up, de Silva said.
"Businesses had been more relaxed about it as of late," he said.
"You can’t blame them also in a way because they thought there was no risk."
Larger hotels had continued to maintain the cover, while smaller hotels had dropped it after the war ended, de Silva said.
The Sri Lankan government waged a civil war against the Liberation Tamil Tigers Eelam (LTTE) which was demanding a separate state in the country’s North and East.
The LTTE carried out dozens of terror attacks against civilian targets during the conflict.
The NITF said it had warned businesses to be prudent and continue the cover during the past 10 years.
"We were always telling even through the LTTE was not there, we are still exposed to international terrorism," de Silva said.
"We were not 100 percent safe from the risk."
Government security forces had also been complacent, ignoring reports from foreign intelligence agencies in the weeks leading up to the attack.
A state intelligence agency report on the attacks was not acted upon, and politicians were not informed of the risks, President Maithripala Sirisena admitted.
He also admitted that the National Security Council had known about the bombers and suspects, and their foreign training for over three years but had not taken action due to a lack of hard evidence.
On Wednesday, President Sirisena asked for the resignation of Inspector General of Police Pujitha Jayasundera and Defence Secretary Hemasiri Fernando. (Colombo/Apr25/2019-SB)