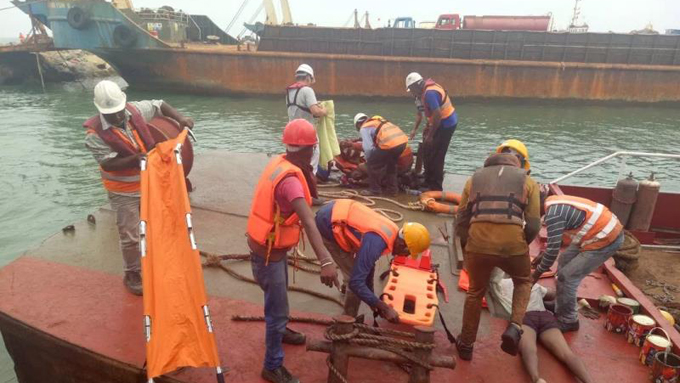 
ECONOMYNNEXT – A Chinese sea sand dredger working on a sea reclamation project near Sri Lanka’s Colombo port had rescued two shipwrecked fishermen who were adrift clinging on to a piece of flotsam.

The captain of Xin Hai Feng, a vessel working for Shanghai Dredging Company at Colombo Port City project, had spotted the two drifting fishermen who were clinging on to a empty fuel diesel drum.

The rescue team from the Port City had used a barge to reach fishermen amid waves as high as 2.0 metre waves, the company said.

The fishermen Sunil Anthony(64) and Ranjith Igneshes (57) had been rescued at 13:59 hours and transferred to National Hospital by emergency medical ambulances.

The two fishermen had left in a deep sea fishing boat on July 14. The engine had failed. The drifting boat had later struck a reef.

They abandoned ship and started swimming to the shore with the help of the empty fuel drum, the company said.

The fishermen had been without food and water for 48 hours. (Colombo/July19/2018)