Sri Lanka is at the cusp of an economic transformation. In a few years, per capita GDP will reach $6,000 from the current $4,000, leading to an uplift in consumer spending. As citizens become more affluent consumption related businesses from retail to healthcare, property and financial services will experience exponential growth. Investors will find Sri Lanka an attractive destination; but that’s not all.

John Keells Holdings, comprising 70 companies across a diverse range of sectors, is positioned to capture Sri Lanka’s next growth-wave. Cinnamon Life, a mixed-development resort in downtown Colombo is its flagship project.

Economynext daily and weekly email newsletters covering the best of politics and policy.

John Keells Properties is taking the unconventional approach, for Sri Lanka at least, to position its Cinnamon Life office tower as an investment asset. What is the thinking behind this?

Jayasundera Moraes: We believe there’s a real opportunity here. Apartments, as an investible asset, dominate Sri Lanka’s, though nascent, high-rise property market. Office spaces are not hot assets that can be bought and traded. In Sri Lanka, commercial property developers lease out office spaces. The John Keells Group’s ambitious mixed development project Cinnamon Life has changed all that. We have created a market for office spaces as an asset with Cinnamon Life’s 30-story office building, which will be the first to come online in 2020.

Half the office tower’s capacity will be sold to potential investors while the rest will be leased. We can always sell more if there is demand. Before building commenced several years ago, there was acceptance among prospective investors and by local corporates which was very encouraging. We’ve already sold a few floors to local businesses and continue to generate interest. There’s been firm inquiries from multinationals with regional offices elsewhere. There are opportunities to attract regional offices to Sri Lanka because cities in places like Hong Kong, Singapore and even India are becoming too expensive. Colombo has what it takes to attract global talent. Thecity offers comfortable living and affordability compared to regional markets. Sri Lanka is the next miracle that’s waiting to happen. Tourism will boom. The Port City will transform Colombo’s business centre. The expat community will grow, and skilled Sri Lankans will return home. What that does to any consumer-related business and the economy is just phenomenal.

Sri Lanka has trade agreements and good relations with South Asia’s largest economies India, Pakistan and Bangladesh. This little island can potentially become what Singapore was to Southeast Asia or Hong Kong was to China. Now is the time for investors to join Sri Lanka’s growth trajectory and for multinationals to set up regional offices here while cost dynamics remain favourable with significant upside for returns.

What’s the outlook for Sri Lanka’s property market and what does that mean for Cinnamon Life?

Moraes: We are quite bullish about the property market, not just residential. We don’t believe there’s an oversupply of residential apartments because Colombo still lags behind other cities in the region in terms of urbanization. Cinnamon Life was conceived to plug into all these opportunities that will transform Sri Lanka’s economy. But we will also drive these transformations. John Keells Properties’ vision is to transform how people live in the city.

Since the 1970s, people left the city to live comfortably in the suburbs. Now, we see people coming back to the city. There’s an emerging middle and affluent class that want to live in Colombo where they also work. They want to school their kids where they live too. In Kuala Lumpur, over 70% of city dwellers live in high-rise apartments, in Mumbai that’s even higher. As Sri Lanka develops, more people will want to live in comfortable high-rises in the city. This was why we developed residential properties such as The Monarch, The Emperor, Onthree20 and 7th Sense and the ongoing projects Cinnamon Life and TRI-ZEN. Cinnamon Life will transform Colombo and become the centre of the city. We will make this happen by bringing in an 800-roomed five-star hotel, 427-unit premium residential apartments, a 30-storey office tower and a state-of-the-art shopping mall and a convention centre.

All these facilities and amenities will be within the complex, making it a truly integrated resort. At the current rate, tourism will grow at single digits each year. That’s not enough to realise the country’s potential. We need to attract conventions and events and have the space to accommodate foreign visitors several thousand at a time. There’s a growing MICE (meetings, conventions, incentives and entertainment) market in India that’s currently heading to Malaysia, Singapore, Thailand or Vietnam. Cinnamon Life will unlock that market for Sri Lanka.

Another factor is the Port City because investors and their teams will need a place to live. So, in the next five to ten years, there’s going to be demand even from the Port City in addition to tourism, expats and the rest of the market.

WHAT IS CINNAMON LIFE?

THE GRANDEUR IN NUMBERS 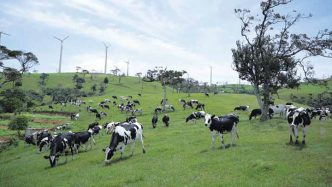 Can the UNP get its act together?

We use cookies to ensure that we give you the best experience on our website. If you continue to use this site we will assume that you are happy with it.AcceptPrivacy policy